I was in a rare photo taking mood Wednesday night and grabbed my latest Monster High acquisitions out of my doll cabinet for an evening with the Pentax. As is normal for me, nothing really artistic came out of the session but it does give me a reason to make an update on this sadly neglected little blog. So without further ado – My Hauntlywood collection in ranked order! 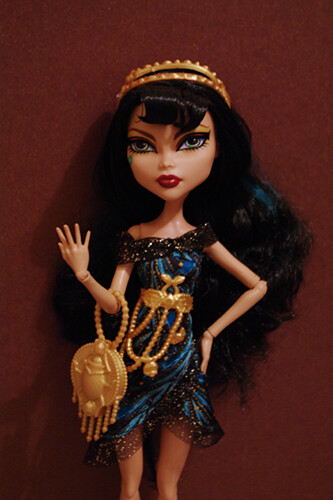 Cleo’s dress is rather pretty and not as obviously “mummy wrapping themed” compared to most other Cleo outfits I own. That crown/head band is elaborate – with a scarab on one side and a mixture of jewels and snakes on the other. Her regal looking belt and scarab bag tie nicely together with her gold shoes. I believe her shoes are supposed to have snakes along the top of them but it is hard to make out and seem pretty boring otherwise.

I only own Cleo because my Target was having a 40% off sale on Monster High dolls and I felt like I hadn’t had the chance to buy a Cleo in a long time. The only more noticeably absent original character missing from shelves lately is Ghoulia Yelps. 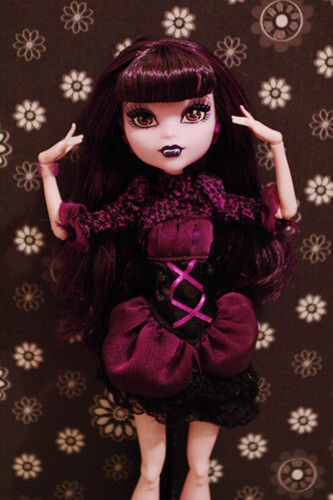 Of the four new characters I find Elissabat to be the most plain – although I haven’t seen the movie (yet) so maybe I’ll warm to her doll a bit more if I like her character. Yet another pink vampire, she has a very nice outfit if a bit too short and her shoes are big black boots with what looks like molded bows down the sides and hearts at the end of molded laces. Her ears are double pierced with purple gems and she comes with a Monster High equivalent Academy Award trophy. I do like her overall dark look – she is ranked much lower than the others only because nothing really stands out about her. 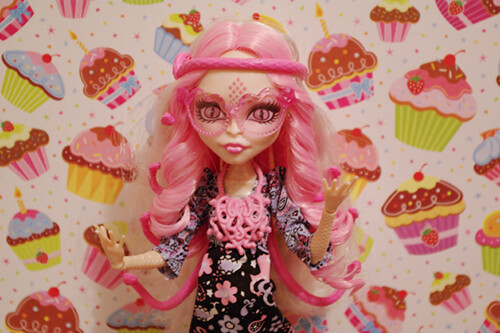 Another gorogn doll but unlike Deuce and the CAM she has very long snakes that she pulls back with her hair in the name of fashion. Even though I am not a fan of ‘pink all the things!’ I really do like her muted pale pink and cream colour combination. Her shoes are big pink boots with fangs on the front and snakes exploding out the top. Her necklace is a pink mass of snakes (which goes along nicely with her head-snakes) and they almost look like they are exploding from her chest. The print on her black dress are flowers, confetti and a box of snakes. To top it all off she has scales over her entire body, just like the CAM gorgon. She also comes with a nifty make-up kit that opens and closes.

I have read about the interwebs she is hard to get with great eye screening which is unfortunate as her glasses are clear pink shades. As I have learned through reading Viperine’s diary only Deuce’s gorgon family have the ability to turn people to stone with their gaze which explains why both Viperine and the CAM aren’t stuck with sunglasses all day, every day. 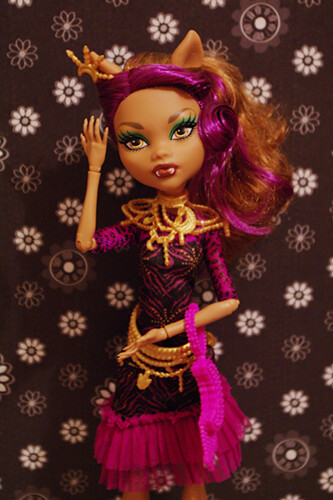 I suspect Clawdeen would be lower on most other’s lists being a basic line doll and one that hasn’t strayed too much from her standard theme. She has gold accessories and plain gold shoes just like Cleo, although Clawdeen is sporting a bag that is *that* shade of purple. Purple, gold, a moon placed somewhere – yup, no mistaking this doll is Clawdeen.

The reason that *this* particular Clawdeen is third from the top on my list is very personal. My fiancé and I are set to be married next year and this January was our engagement party. My future sister-in-law’s own sister baked this particular Clawdeen in a gluten free vegan cake for us for the party. It brought on all the feels. 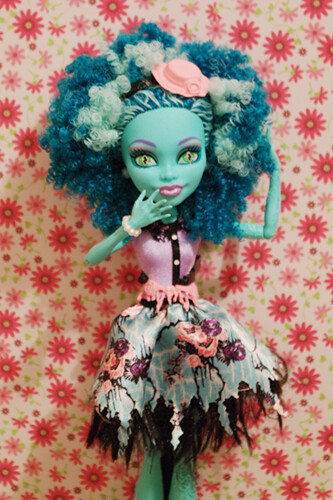 There can be no argument that Honey Swamp is the most unique of the line and will be first on most lists. Her most striking feature being the luscious crown of green hair she has on her head. Mine is a bit flat at the back as being tied in to the box tightly does mush it down. It also needed a slight trim on the sides when I first opened her as there were a few crazy ringlets sticking out awkwardly. Her dress and hat work together to portray Honey as a Southern Belle but her shoes are what make the oufit: they look like sly pink alligator heads. Her accessories are a scene marker and camera which are the most fun of all and although not easily seen in this picture she has alligator teeth painted on her lips. Honey is a lot of fun and has easily become one of my favourite dolls.

So who could beat Honey to the #1 spot? Well, the prize goes to: 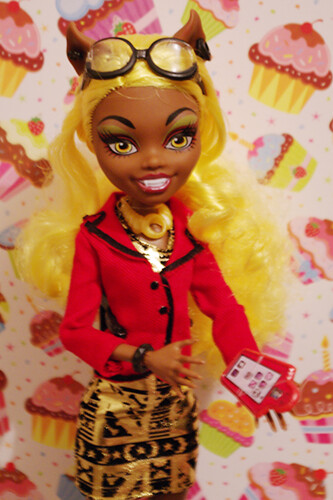 “Don’t you mean Clawdia Wolf?” I hear you ask. Well, no. No I don’t. Clawdia’s design compared to the other three deluxe dolls is the least inspired. Boring gold shoes pared with knee-high red socks, a gold dress and red blazer. Clawdia’s fashion accessories are black and her item accessory is that red palm pilot. She is also taller than the other three new characters as she has the adult body shared with the Nefera and Bloodgood dolls. What grabs me about Clawdia is that giant, gleaming, “I’m trying to sell you something” grin. The fact her fangs are so visible helps add to the effect of the shyster glam lawyer, and that red blazer makes me think of a specific character in a television series I’ve actually referenced before in this blog.

The character I’m talking about is Lionel Hutz in The Simpsons.

The Simpson’s episode “Reality Bites” is one of my very favourite episodes. It centres around two plots that come spectacularly together at the end – one of which is that Marge gets a job at a real estate agency run by Lionel. The employees wear red power Blazers and Lionel tries to teach Marge to sell houses by telling very shady “truths” while flashing friendly smiles.

Certainty not the look Mattel intended for Clawdia at any rate.

As you can see I am still missing Draculaura and Lagoona which is only two from the complete set which I *know* will wear down on me.

So regardless of whether you agree (or more than likely) disagree with my list, The Hauntlywood line introduces four great new doll characters which I hope to see released in other lines further down the track.

And where are all the Ghoulia releases?!