I’ve mentioned before I have a few ‘grail dolls’, but now I have one less. I decided to spoil myself as I’d gotten a new job so I jumped on to eBay thinking I would try to hunt down a Catwalk Kitty I’m missing or pre-order myself some SDCC goodies. My eyes turned to stars however when I found this set for sale from someone in Japan downsizing their Pullip collection:

The first Happy Birthday Pullip and Namu. They weren’t exactly a bargain, but for a MIB limited doll set with a run of only 300 from almost a decade ago, the seller did have them for a fair price. For those who are not in the know, Pullip’s current ‘boyfriend’ is Taeyang, but before him the love of her life was Namu. They parted ways in 2005 when Namu made his last doll appearance in the second Happy Birthday set and interestingly enough the second set was the last one – Taeyang has never been in a Happy Birthday set and I actually can’t think of a time when Taeyang was packaged in the same box as Pullip at all.

I had them boxed for a few days before I could bring myself to open them. They just looked so sweet together. Also I’m pretty sure I’ve mentioned before Pullips do not have box prisons, they have fortresses.

So yesterday I stopped putting it off and many twist ties and curse words later, I had everything free. The masks are stunning, the clothes are exquisite, their faces are beautiful! It’s a small shame that due to the fact her hat was packaged so long it wont sit flat and keeps trying to curl around itself – but that is my only nitpick. Both Pullip and Namu’s face were a bit dirty, as well as their masks. I had heard of this happening with the older dolls before (and it still sometimes happens with the newer ones) but it all rubbed off easily with a magic eraser so no harm done. Also as these were older dolls they came with the metal stands which are much better than the plastic ones the newer releases have. I’ve had doll shoes start to melt while in contact with the plastic bases before (I’m looking at you Ciel). 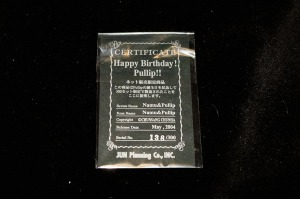 I’m number 138! It’s a silver printing on the black backing – I wasn’t expecting them to come with a certificate, I’m so use to the doll cards.

Pullip’s shoes. Not the style of footwear I was expecting to find under that petticoat.

So instead of them being King and Queen of the doll room, I’ve decided to display them out on my fireplace mantle so I can see them more readily. This is actually my first Namu, and now that I have him and see how handsome he is I have no idea why I never got any others (and of course they are much less readily found now).

This mildly coherent review is due to the fact I am just stupidly ecstatic to finally have these dolls. I can say I love everything about them and they are perfect and everyone should immediately try to hunt down one of the remaining 299 out there for themselves!

It is however hard to be really critical of a set of dolls you have been dreaming of since you first started doll collecting.