In the end, I did decide to put that Soom SO Galena head I mentioned in my first post on layaway. I feel that the Galena sculpt is a little special to me, as she was the first female sculpt to make me actually feel the need to own a female doll.  Of course I had already three anthro girls, but it isn’t quite the same.

As I got into the hobby after her MD order period and I didn’t have the funds at the time she was released for the Christmas event, I found a nude human MD Galena in grey skin on the market place with her default face-up. I bought her talons on the market place separately, and bought the Sweet Witch outfit direct from SOOM to dress her in.

When she arrived she was named Pandora, a lowly weakish demon with a human parent with aspirations of power. And I decided I needed her to have a human form (the form she uses to attempted to mislead everyone in), which is where this new head comes in. 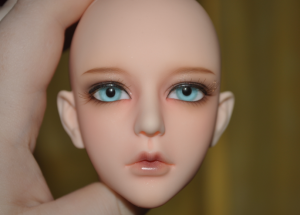 Seller photo of the SO Galena head.

I was this close to buying a bronze Galena from the Soom free-choice event as well, but stopped myself because:

So I will officially have half the colours Galena comes in (the other two being the bronze and then white) and I know my collecting nature is going to want me to eventually get the other two – whether that ends up happening though is something else.